The name Taghkanic originates from the Algonquin Indians and has several different interpretations, including "water enough", and "full of timber". There resides a rich history that dates back to pre-revolutionary times, when a 160,000 acre grant was given by the English king to Robert R. Livingston. The lands that Livingston acquired was called the Livingston Manor. The lands that today comprise the towns of Taghkanic and Copake were split off from the Livingston Manor in 1803, and the new town was was called Grainger. In 1824 another division split the town of Grainger into two towns, Copake to the east and Taghkanic to the West.

The town of Taghkanic resided originally in the Livingston Manor, with the Van Rensselaer Manor lying just to the north, there remains many descriptive places. For example the Manor Rock , which lies three miles southeast of Churchtown was an important boundary marker. The Maryburgh Forges, now known as New Forge, was the site of a grist mill, blacksmith shop and feed and plaster mill. The community of West Taghkanic was once known as Miller's Corner's, once an intersection of five roads on a point of the early Hudson-Salisbury (CT) road. The hamlet was later named West Taghkanic by the United States Postal Service. The Hamlet of East Taghkanic once included a tavern built prior to 1770, post office, store and Lutheran Church. A few school houses still stand in both hamlets and throughout the town.

Throughout the 1900's agriculture became an important part of the town of Taghkanic's history. Multiple dairy farms and orchards dotted the landscape, many of which were self-sufficient. As the number of families grew in the area, so did the interdependence of the people in the community. The Taghkanic Grange #998 was established to provide a meeting location for families to join together for social activities. The Grange stood where the Church of the Holy Cross building currently resides. It has since become the Hudson Valley Performing Arts Center. The Taghkanic Fire Company #1, Craryville Fire Department and Churchtown Fire Company have served the town since at least 1944. With the construction of the Taconic State Parkway, which reached route 82 in 1957 more commerce came to the area, along with an influx of vacationers to Lake Taghkanic State Park, which partially resides in the town boundaries. Taghkanic was becoming less remote to the outside world.

The name Taghkanic is now famous as a result of baskets made by locals. The Taghkanic Basket is a keepsake of yesteryear. Skillfully crafted, these baskets have withstood the test of time, by their unique design. Today only a limited number of baskets can still be found, as the skills to craft such baskets were not passed down to following generations.

Today this town, once a remote mountainous wilderness, is an easy day trip from New York City, and a simple commute to Albany. Many of the residences now serve as second homes. 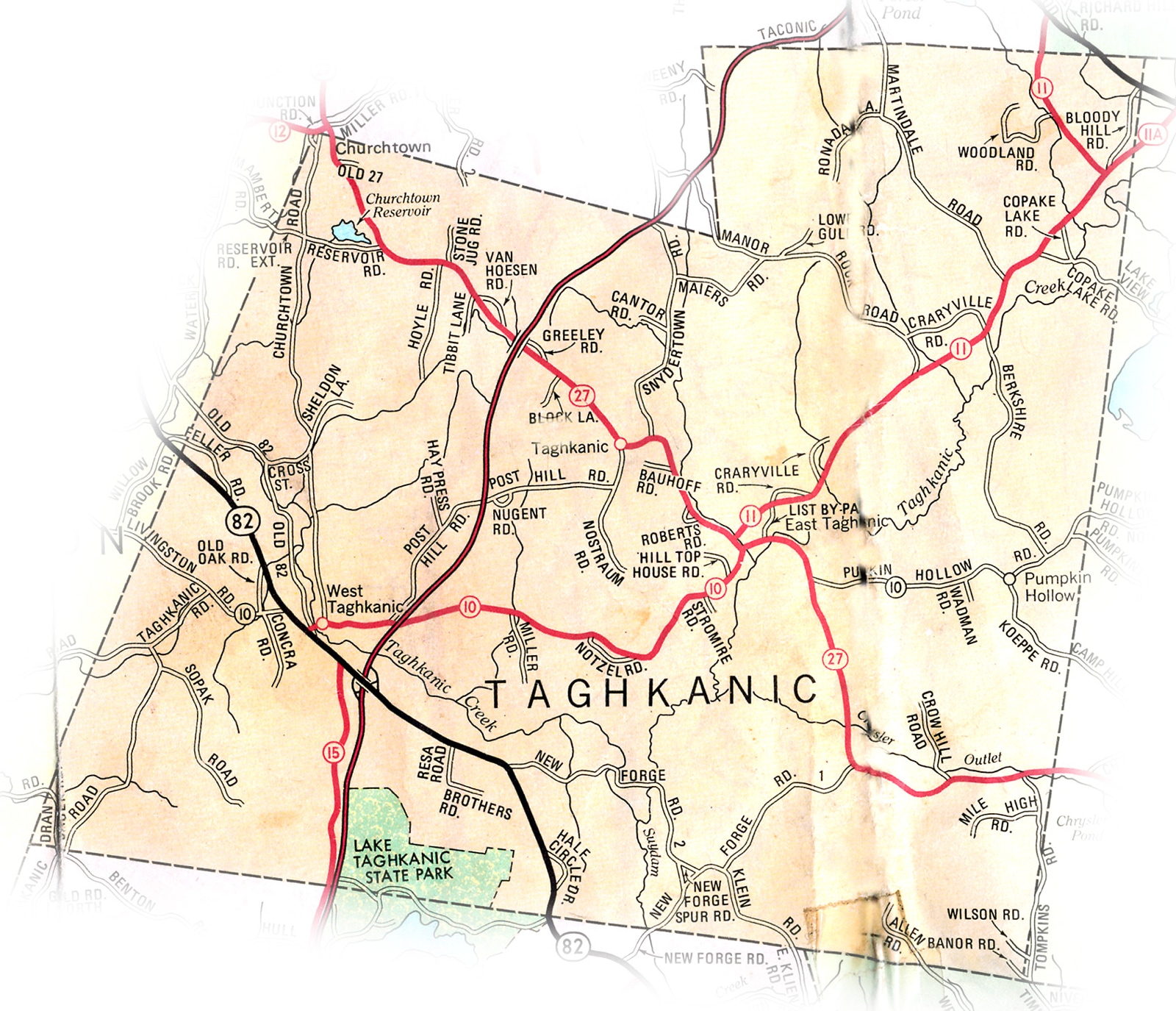